Give Kids A Smile Day

The Treasure Coast Dental Society annually holds, “Give Kids A Smile Day” at Indian River State College. The event is one of many done under the umbrella of Project: Dentists Care, the Florida Dental Association’s non-profit charitable organization. Give Kids A Smile Day is a national dental access day designated by the American Dental Association. Each year, Florida dentists donate more than $500,000 worth of free dental care and treat more than 2,100 patients during GKAS Day. 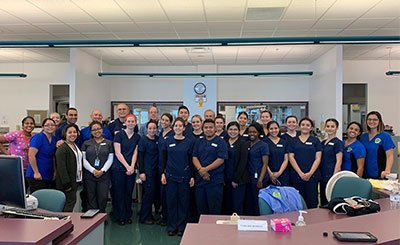 As a Give Kids A Smile Coordinator for the Treasure Coast, Dr. Reza works with local school nurses to identify at risk children who would otherwise be unable to receive necessary dental work. Volunteers from the Department of Health and Indian River Community State join forces with several local dentists to provide much needed dental services to the children of the Treasure Coast. Close to 40 children received free cleanings, exams, fluoride treatments, and restorative dental work throughout the day. Volunteer doctors like Dr. Reza along with several dental assistants donate their time and skills to treat these underserved members of the community. GKAS is now a two-day event providing over $25,000 worth of pro-bono dentistry.

Each December, as we gather with our friends and families to celebrate the holidays, many of us became reacquainted with the true meaning of the season. In the spirit of the season, several Treasure Coast dentists open up their hearts and their offices to treat those less fortunate individuals that could not otherwise afford dental care. Project Christmas Smile was started by Dr. James Strawn of Fort Pierce, who believed that no one should wake up Christmas Day with a toothache. Over the years, Project Christmas Smile has morphed into a tri-county effort utilizing multiple different private offices and the dental clinic at Indian River State College to provide much needed dental care to the underserved members of the Treasure Coast. Project Christmas Smile is now done under the umbrella of Project: Dentists Care, the FDA’s non-profit charitable organization. As an original Project: Dentists Care Coordinator for the Treasure Coast, Dr. Reza has worked hard to make sure that the work being performed at each location was accounted for. Each year close to 30 dentists and dozens of hygienists and dental assistants put forth nearly 150 hours of volunteer time, treat over 200 patients and perform over $60,000 worth of pro-bono work. On behalf of the Treasure Coast Dental Society and Project: Dentists Care, we would like to extend our thanks to our volunteer dentists. Thanks again for all of your time and effort. 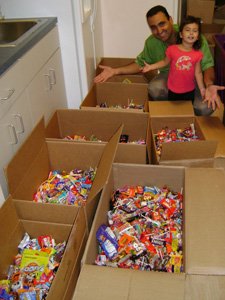 “Cash for Candy” is always a great event at Ardalan Pediatric Dentistry. Each year, Dr. Reza and his team agree to “buy back” Halloween candy from area kids. Kids receive $1.00 for each pound of candy, plus they get to pick out a special toothbrush and are given gift certificates to local shops. In addition, the team holds a raffle for great prizes for all the kids that donated their candy. The candy, along with thank you cards signed by the kids, are then shipped to our troops overseas!

Previously, Dr. Reza has volunteered to help with St. Lukes Annual Back to School Giveaway. The event’s mission is to provide a safe, fun and informative event for students and parents of the community, many of whom are struggling to provide the basic needs for their families. Parents and students were given food and drinks while Dr. Reza provided oral hygiene instruction to over 200 children who also received a free backpack filled with school supplies, as well as, oral hygiene supplies. Over 300 people attended the event surpassing any of the original estimates.

When Dr. Reza was asked to help with the Junior League of Martin County’s first Health Fair, he gladly accepted. Dr. Reza was happy to participate at the event held at the Gertrude Walden Child Care Center. Along with several other dentists, Dr. Reza provided free dental screenings and spent time discussing dental health with parents and children. In addition to the dental screenings, dozens of volunteers helped provide the children with free vision, fitness, mental health and various other health screenings. Not only did families receive a free brunch and goodie bags with health supplies, the kids also received bicycle helmets and door prizes. It was an incredibly worthwhile event for the members of the community who may not otherwise have access to these services.

DOH-VHS Champion Dentist of the Year
Each year, the Department of Health’s Volunteer Health Service holds its annual award reception at the Pelican Yacht Club on. The banquet celebrates and recognizes all of the hard work that community members do to provide much needed care for the underserved. At the 2007 banquet, Dr. Reza was recognized as the DOH-VHS Champion Dentist of the Year! Dr. Reza was recognized for his work as Project: Dentists Care Coordinator and Give Kids A Smile Coordinator for the Treasure Coast. Dr. Reza is always excited about continuing to help provide the necessary dental work to the underserved members of our community.

PDC Distinguished Service Award
Dr. Reza was selected to give a presentation at the 2007 Florida National Dental Convention discussing the activities of the Treasure Coast chapter of Project: Dentists Care. As the Project: Dentists Care Coordinator, Dr. Reza was proud to talk about all of the great community service projects that area dentists have been involved in. Later that evening, Dr. Reza attended a reception for Atlantic Coast District Dental Association members where he received a statewide PDC Distinguished Service Award from the Florida Dental Association.

Distinguished Alumnus of the Year
As an active alumnus of Nova Southeastern University College of Dental Medicine, Dr. Reza strives to represent his school and his profession in a positive light. In 2008, Dr. Reza was recognized twice for his numerous accomplishments. In January, Dr. Reza was awarded the prestigious Distinguished Alumni Award from Nova Southeastern University. This award is the highest honor bestowed on an alumnus by the President of the University. In addition, Dr. Reza was nominated for Alumnus of the Year for the entire university by a select panel of faculty and administrators. Dr. Reza was one of six alumni selected from more than 100,000 NSU alumni living in more than 63 countries around the world. These are tremendous accomplishments that reflect the hard work and dedication that Dr. Reza has for his profession.

American Dental Association Recognition Award
At the Treasure Coast Dental Society’s March 2008 business meeting, Dr. Reza was given a special award by the American Dental Association. The award read, “In recognition of the significant contributions made by Dr. Reza to increase access to comprehensive dental care for special population groups.” The award was signed by the President of the ADA and given to Dr. Reza for his outreach efforts.

DOH-VHS School Volunteer of the Year
The Department of Health’s Volunteer Health Service again held its annual award reception at the Pelican Yacht Club in 2008. The banquet celebrates and recognizes all of the hard work that community members do to provide much needed care for the underserved. Following up on his Champion Dentist of the Year award, Dr. Reza was recognized as the DOH-VHS School Volunteer of the Year! Dr. Reza was recognized for his volunteer work as part of the St. Lucie County Oral Health Coalition. His endeavors included doing free screenings on several hundred area first graders to gather much needed data on the caries rate in the county.

President – Florida Academy of Pediatric Dentistry
One of the most prestigious titles that a pediatric dentist in Florida can have is to be the President of the Florida Academy of Pediatric Dentistry. Dr. Reza has the distinct honor of serving in that role not once, but twice!! At the completion of his 2011 term, he was unanimously elected to serve a second term ending in 2012. Dr. Reza is incredibly proud of this achievement and the contributions that he was able to make to the FAPD.